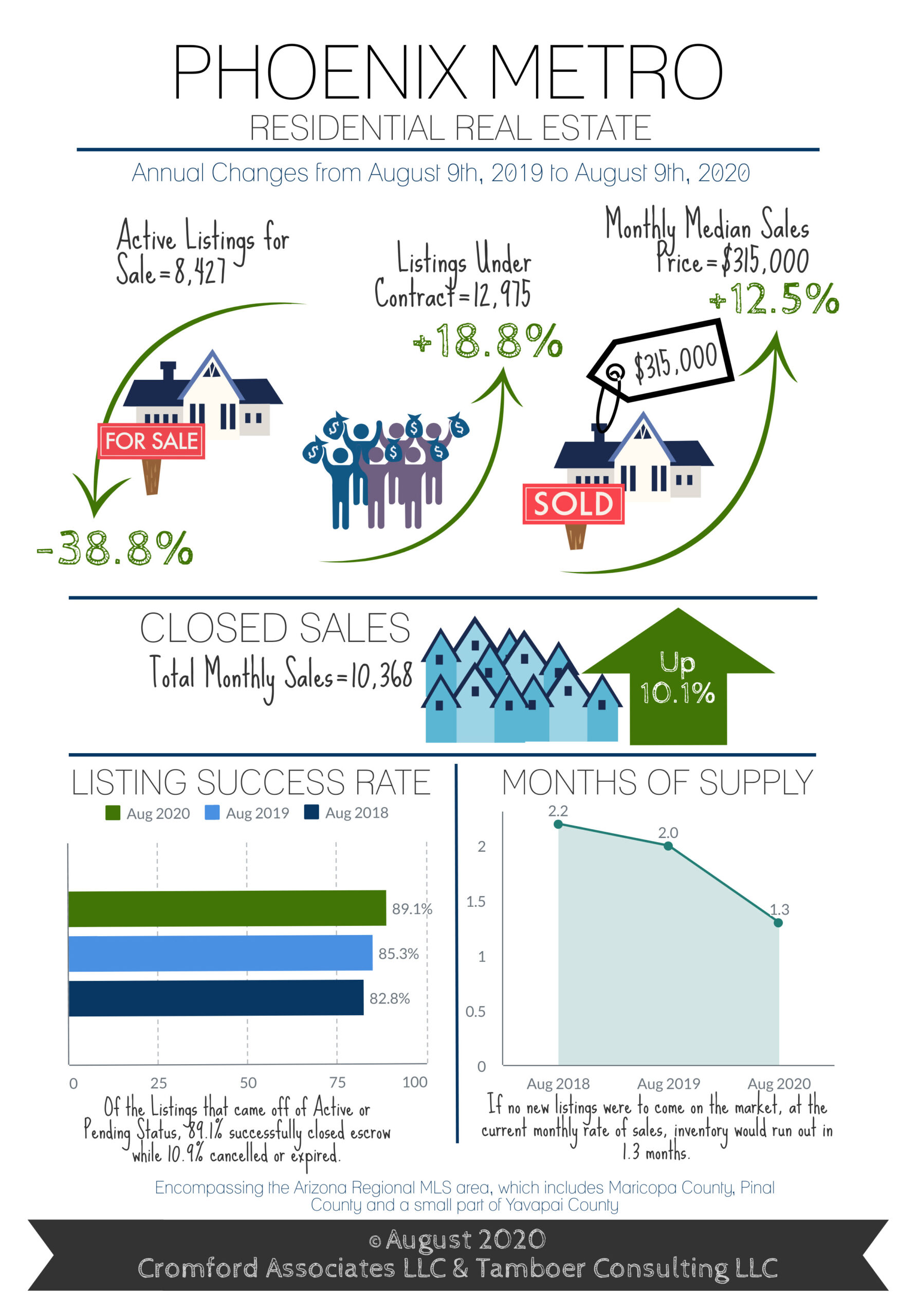 So much for the Summer Slowdown - Record sales abound

It’s a jungle out there for buyers, but despite recent appreciation rates the HOI* measure for Greater Phoenix increased to 64.8 for the 2nd Quarter 2020; the previous measure was 63.0. This means that a household making the current median family income of $72,300 per year could afford 64.8% of what sold in the 2nd Quarter of 2020. By comparison, the HOI measure for the United States was 59.6. Historically, a normal range for this measure is between 60-75. During the “bubble” years of excessive appreciation between 2005-2006, the HOI plummeted from 60.1 to 26.6. Typically, if it falls below 60, the market should start to see a drop in demand. With the most recent increase however, Greater Phoenix is still within normal range and experiencing demand 20% above normal for this time of year. What makes this market significantly different from the infamous bubble and crash is the relation between resale housing growth and population growth. In the early 2000’s, housing was growing faster than the population and creating a glut. This glut went unnoticed due to excessive speculator (i.e. “false”) demand fueled by loose lending practices. When loans tightened up, the glut came roaring into focus as vacant inventory soared to over double the normal levels. However since 2006, the population has grown faster than housing. It has taken 14 years, but this population growth fueled by job growth has finally consumed the glut of resale housing created during the bubble years and now the market is facing a shortage of homes for sale. This type of market and appreciation is not sustainable over time, however it’s here now and properties purchased today are expected to continue appreciating over the next 6-12 months.

So much for the “Summer Slowdown”, July had a record number of closings go through the Arizona Regional MLS; surpassing every July as far back as 2001. July also broke records in dollar volume with $3.9 Billion sold. The best July ever recorded prior was in 2005 at $2.9 Billion. The monthly appreciation rate finalized 12.5% higher than 2019 and was the 4th highest appreciation rate for July going back to 2001. One third of homes closed were over asking price and only 15% involved any sort of seller-paid closing cost assistance; down from a high of 27% last May. Half of all sellers who accepted contracts in the first week of August did so with 7 days or less on the market. Contracts on luxury homes over $1M are up an incredible 93% over last year at this time. Between $500K- $1M, contracts are up 64%. Between $300K-$500K, they’re up 39%. Between $250K-$300K, up 15%. If you need to sell, this is the time to do it.

*The HOI Index stands for “Home Opportunity Index” and is published quarterly by the National Association of Home Builders and Wells Fargo. It measures the percentage of homes deemed affordable in an area based on lending guidelines, interest rates, median income levels and median price. The most recent report was released on August 8th, 2020.

The Lang Group is a team of residential Realtors serving the Phoenix Metro Area, affiliated with HomeSmart and part of the Elite Group of HomeSmart agents.  They have helped hundreds of clients and closed over $100 Million in home sales, providing years of knowledge and experience. Their specialties include buyer representation in New Home Sales, First-Time Buyers and Credit Challenged Buyers.  They also apply their skills and experience when representing Sellers.  Their motto “When Experience Matters” carries through to their many satisfied clients.